To top of the page 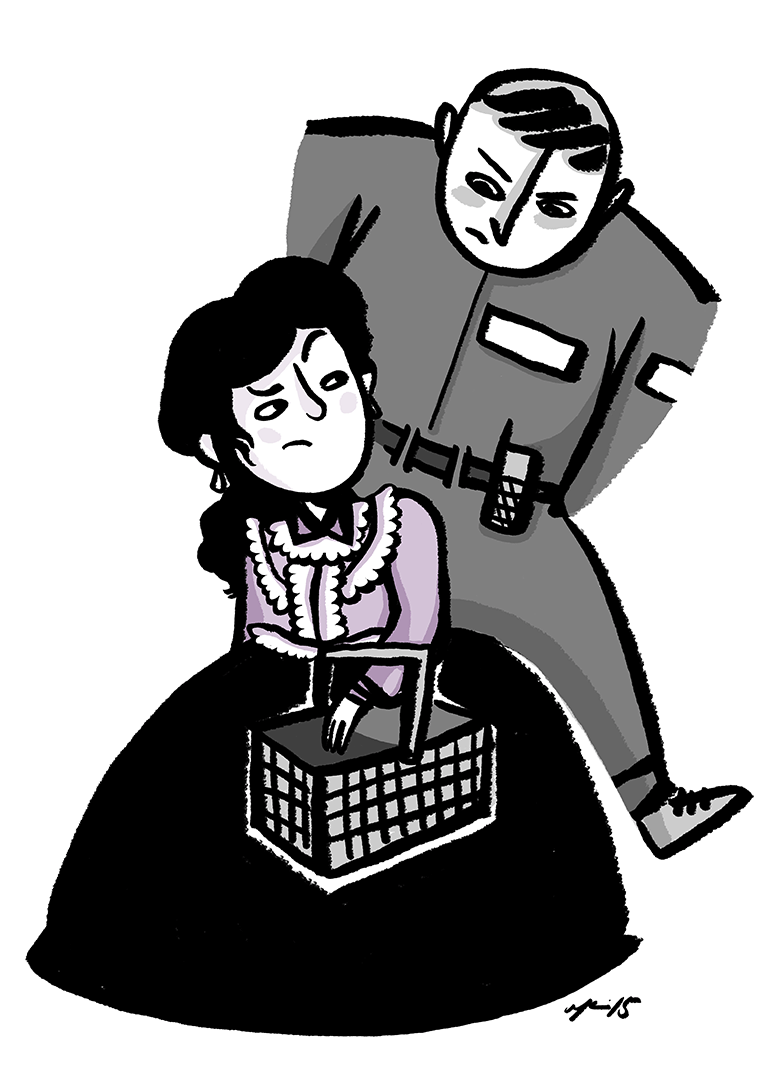 The contents of the assessment of equality may be divided into two sectors:

1) Identifying discrimination and intervening with it
2) Fostering equality.

The evaluation of discrimination may target both HR policy and activities. The assessment may, for instance, seek answers to the following questions:

Even different treatment which is not based on legislation may have an acceptable objective with regard to fundamental and human rights. For instance, measures preventing the social exclusion of young people, promoting the equality of language groups or subsidies granted to religious minorities do not constitute discrimination because they strive towards a goal which is acceptable from the perspective of fundamental rights. Such goals may include the promotion of linguistic and cultural rights, non-discrimination, equality, and the rights of children and minorities.

Pursuant to section 12 of the Non-Discrimination Act, different treatment at work and in employing personnel is justified if the treatment is founded on genuine and determining requirements concerning the type of occupational tasks in question and their performance, and the treatment is proportionate to achieving the legitimate objective. When hiring a priest, for example, it is permissible to require membership in a certain church, or workers with a Chinese background may be sought for a Chinese restaurant.

The following therefore applies to the assessment of equality:

What is personal data?

Personal data is deemed to be sensitive if it is related to or intended to be related to:

Examples of experiences of discrimination among various population groups

People with religious and other convictions

Formal equality means that people are treated in the same way in similar situations, without discrimination.

The active fostering of equality may involve deviations from the principle of equal treatment in order to implement actual equality for disadvantaged groups. This requires a change in the conditions that prevent equality.

Reasonable accommodation secures the actual equality of disabled persons in various situations. Allowing reasonable accommodation is an obligation under the Non-Discrimination Act, which, if neglected, is considered a form of discrimination. According to the UN Convention on the Rights of Persons with Disabilities, ‘reasonable accommodation’ means any necessary and appropriate modifications and adjustments not imposing a disproportionate or undue burden, taken to ensure that persons with disabilities can enjoy or exercise the full range of human rights and fundamental freedoms on an equal basis with others.

The purpose of group-specific assessment is to consider whether persons of different backgrounds have equal opportunities to act within an organisation, or to use the services it provides. In connection with such an assessment, certain methods can be identified of promoting equality between persons of different backgrounds. The prerequisite for conducting an assessment is that the organisation has sufficient knowledge of and competence in the special issues affecting the groups. Awareness can be enhanced through measures such as training staff and involving non-governmental organisations, representing different groups, in the assessment.

The questions in the following table may help in getting started with an assessment.

The promotion of equality can also be examined from the viewpoint of the development of organisational functions. Naturally, the functions of organisations vary between sectors. For instance, the organisational development of educational institutions from the equality perspective requires different measures to those applied when developing police functions. However, most organisations are fairly similar with respect to sectors of HR policy or, say, the service process. The purpose of function-based assessment is to examine how equal the various functions of an organisation are, how equality problems can be identified and what kinds of measures can be used to foster equality.

The following examples describe common functions related to HR policy and operations, and how equality within such functions can be purposefully fostered. In addition, the table shows examples of best practices used in trying to meet the goals set.

Equality can also be assessed from the perspective of good relations between people. This means analysing the impacts of the social atmosphere in the working community or society as a whole on the operational capability of people from diverse backgrounds. The key domains of good relations are attitudes, personal security, interaction with others, and participation and influence. For instance, the following aspects may be reviewed: what kinds of attitudes do members of the organisation have towards various population groups, how safe do staff feel, can individuals be openly themselves, what kinds of factors influence interaction between different groups and what kinds of experiences of inclusion and influence do people of different backgrounds have. Support materials have been developed for the monitoring of good relations, including a set of indicators for the measurement of good relations, to be used when conducting the related kind of assessment. Sample materials are available in the following section of the equality.fi website: 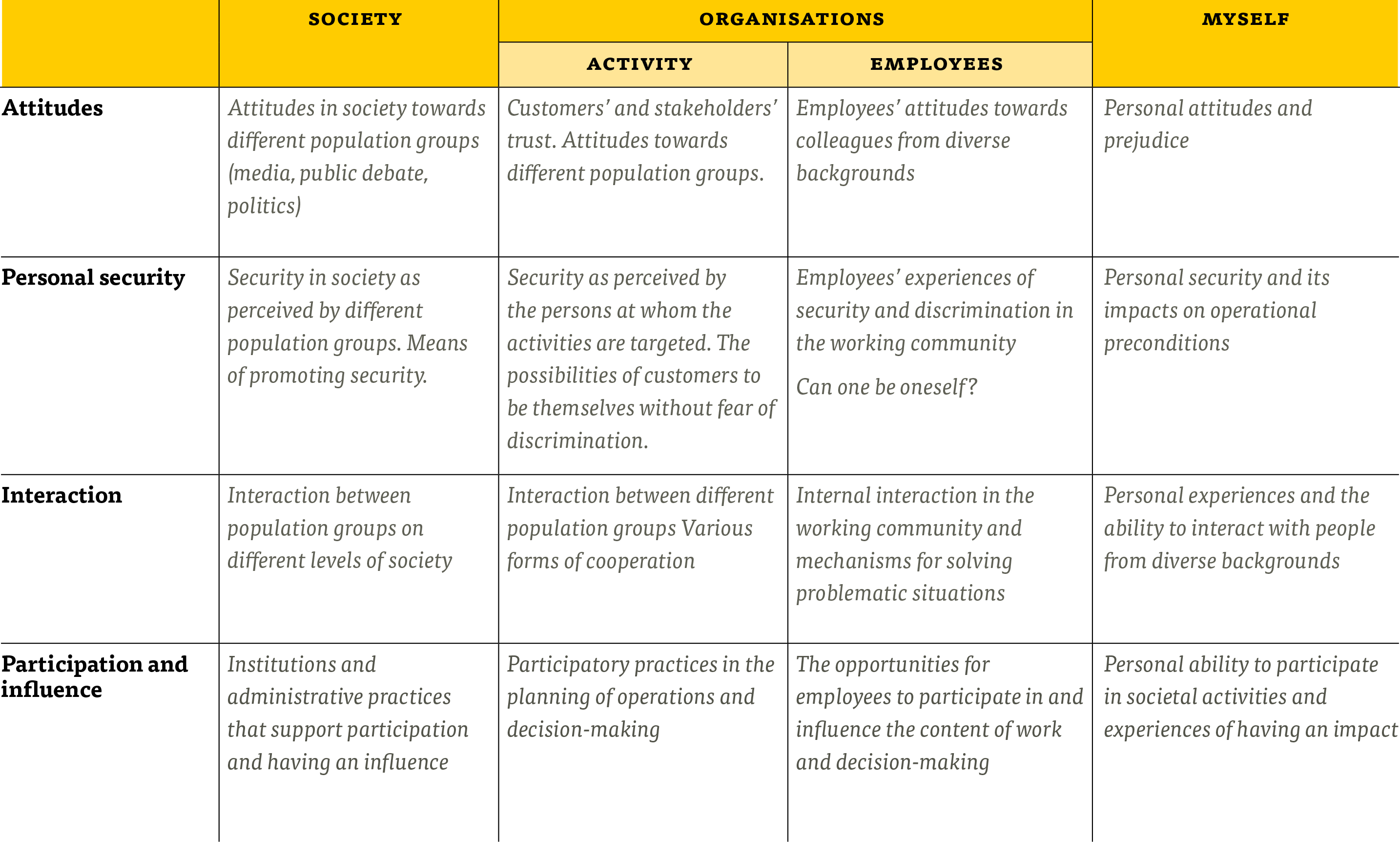 The following section: How to assess? ›